For 3 years, I watched my peers fight for justice throughout the city and they have finally been served what they asked for: A CONVICTED MURDER.

On Friday, the ex-Officer, Van Dyke was found guilty of second degree murder and 16 Counts of aggravated battery with a firearm; for every bullet he fired into Laquan’s Estate (body), as adduced by the judge. He was found not guilty on official misconduct of office. Dyke’s bond was revoked and sentencing has been scheduled for October 31.

This is a victory not only for the city of Chicago but for Black America. I learned a lot from my peers and their journey in fighting for justice for Laquan. I learned that we don’t have to agree on everything but what we do agree on is we want change for ourselves and community; we can accomplish a great deal when we stand up for what we believe in and that we are here to make change.

What they have done for the city is remarkable: Mayor won’t be running for second election, superintendent was fired, and local prosecutor lost her bid for reelection, as reported by NY TImes. They are working on upcoming elections, Black Caucus and the morally corrupt alderman(s).

I am happy for the verdict and my peers, but “we” must be logical about how he was convicted and not emotional about the ordeal. I performed some research on criminal laws and doctrines related to the case. I also critically examined the communication disseminated by media.

I am not a lawyer nor a judge. I am an independent journalist and scholar, my duty and responsibility is to examine cases critically with logic and supporting facts.

Breaking it down, charge by charge.

According to the Illinois State Laws, second degree murder carries the sentencing between four (4) to twenty (20) years and is charged as a Class 1 felony. “Depending on the leniency of the judge and the circumstances of the crime, a four-year probation term instead of prison may be an option. The maximum fine is $25,000 plus a surcharge of $3,125. Upon release from prison, there is a mandatory two year parole period.”

In regards to the aggravated assault and battery, according to the Illinois General Assembly, if committed with a dangerous instrument, it is defined in subdivision as a Class X felony which a person can be sentenced to imprisonment a minimum of 6 years to a max of 45 years.

Illinois One Act, One Crime Doctrine

Former Will County Prosector, Jack Zaremba’s Law Office states “a criminal defendant can only be convicted of one crime that corresponds to a particular action, even if that action could constitute more than one offense.”

Which means that he will be sentenced for both charges; possibly serving the minimum imprisonment time or probation; the 16 counts of aggravated battery not holding much weight, can be combined and considered one act for sentencing. Let’s not forget this is a first offense for him and that we must consider if the judge will be lenient or not.

His time will more than likely not be consecutive but concurrent. 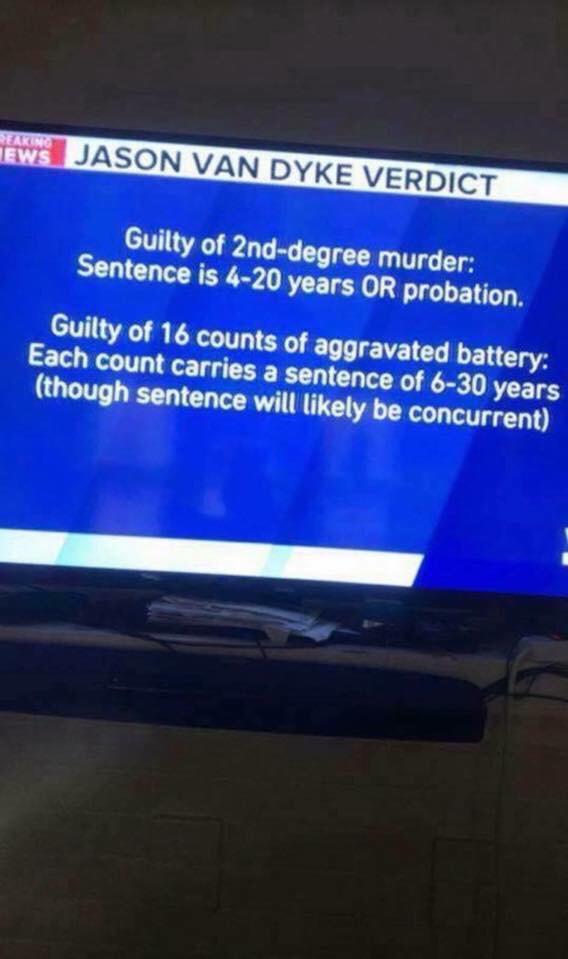 Kevin Graham, president of the Chicago Fraternal Order of Police, says the conviction will be appealed.

Did we really get justice?

One Act, One Crime Doctrine. (n.d.). Retrieved from https://zarembalawoffice.com/blogs/one-act-one-crime-doctrine

And how it affects (and effects) personally…………….

Nationally, black women working in full time, year-round positions make 63 cents to each dollar earned by a white man. This gap is much wider than the 79 cents white women earn for every dollar made by a man and the 87 cents earned by Asian-American women (but again, there is significant variation among different nationalities of Asian women, with some earning far less than this average). And other groups, like Latinas and Native American women, experience a gap that is even larger, making 54 cents and 57 cents per dollar, respectively.

This isn’t your normal blog or opinion journalist post today, it’s a rant, lol.  I’m backed with communications, classes are approaching, I’m freelancing and operating as an Entrepreneur including “Employment” search or “Provide Professional Services” pitching; so I’m managing things well but I couldn’t help but think about the development of my negotiation skills. I even thought about activating my bartending skills to make some quick cash because my checks aren’t balancing my end goals. Maybe this being “Black” isn’t working, so I’ll transfer my status to being “White” to have better opportunities.

Associates Degree isn’t worth much in mainstream market, so to find “work” in your associated area…chances are you could pretty much be overwhelmed with workloads like me or your fucked…lbs.

I said all of that shit to say, how the fuck did “Black Women” get a damn equal pay day if we still don’t have equal pay? Maybe I missed something, shit I don’t know but I’m tired of all the damn protesting themes. I don’t like to celebrate things that we haven’t accomplished but I’m glad to get the awareness that people are acting.

It’s disheartening how limitations are placed on the pool of resources and the gap between the wages of women to men; and “black women” to “white women”.  It’s even worse for women of color to be making less than uncolored women when noted in “history” they equally fought for “Women’s Rights”, together. Seems like “Black Women” have been manipulated and used for their support to be treated unequal.

The National Women’s Law Center notes that this gap can begin to widen over the course of a black woman’s career, causing her to lose nearly $870,000 in potential earnings to the wage gap. And in several states, the wage gap can be even bigger. In Louisiana, for example, black women make less than half of what white men make.

No matter if you’re union, corporate, or independently working as a woman (black or white) you are more than likely to come across sexual harassment. I remember every experience that I’ve had working corporately and independently. As a woman, I have to remember that I also have a personal life, which consist of allowing men to pursue me which is the natural life process. Who am to disrupt it? But why do I have to receive unwanted advances and made to feel uncomfortable as I travel to points with the intentions to make a deal for business operations.

Take, for example, sexual harassment in the workplace, an issue that particularly affects low-wage industries dominated by women of color. Experts have noted that lower pay levels for nonwhite women could play a role in their exposure to harassment, and a new NWLC report has found that from 2012 to 2016, black women filed workplace sexual harassment complaints with the Equal Employment Opportunity Commission at nearly three times the rate of white women.

Before I subconsciously got back to working my plan on how I am going to create $53,000 this year to cover my salary, I woke up to a post about

5 black women talk starting salaries, being underpaid and how they asked for more

and the advice these women ( Karen Civil, Tonya Rapley, April Reign, Minda Harts, and Leslie Mac) shared was inspiring. It inspired me to remember that as long as I continue to be and seek, that I will find. If there isn’t a place for me to merge into and add equity then I’ll have to create a place to store my wealth. I will not be a starving artist or an educated slave/fool.